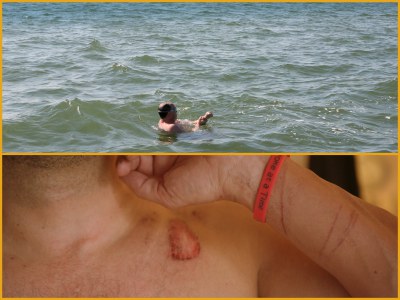 During this 24 mile Tampa Bay Marathon Swim, I froze when two flying saucer sized sting rays decided to accompany Doug. The boat pilot said not to worry, they wouldn’t hurt him.

The dolphins were magical and they showed up three times.

But the jellyfish sting took us by surprise. A jellyfish sting hurts because small nematocysts, located on a jellyfish’s tentacles, release venom into the skin upon contact. It creates an allergic reaction, the degree of which can be all over the board. Doug immediately started sneezing and his stomach was cramping.

I had recently watched the episode of Friends where Monica was stung by a jellyfish on the foot and Chandler and Joey had to pee on it to alleviate the pain. In the show it worked beautifully.

So, I knew just what to do.

One of our kids, who wishes to remain anonymous in perpetuity, obliged.

For some odd reason I also had nondrowsy Sudafed in my backpack and threw out a couple of those.

Doug decided to swim another 1,000 strokes and see what happened. He seemed ok and decided to keep going.

Now that we’re home I’ve done some research I see that the pee thing is a myth. It does nothing except possibly cause more of the toxins to be released causing more pain. Urine, which is only weakly if at all acidic, doesn’t have the strength to stop the sting.

You basically need to be prepared to treat an allergic reaction, fast. (Benedryl, Sudafed, Epi Pen) Vinegar can also help. And if a tentacle is stuck inside of you, it needs to come out via a stick or fishing gloves or more stinging will occur.

Friends is nothing but folklore. I’m done with them.