Without realizing it I’m picking up the house, cleaning out the fridge, putting fresh sheets on the beds, like we’re going somewhere. Nesting.

At a monthly meeting in which I participate at the village hall today they wrapped it up by saying goodbye to me. I felt verklempt and realized that the next time I see them all I’ll have a story to tell. Some of them slapped me on the back, like I was about to swim the English Channel. They asked me to send pictures and videos and I assured them that I’d stay in touch as much as I could. I’m still not sure if there is cell service in the middle of the English Channel. (I will, however, figure it out and it’ll all be on the Facebook pages for A Long Swim and My Bionic Boyfriend, so I guess you had better “like” them in short order.)

I suppose this all makes sense because Doug told me that he’s now tapering. That’s when swimmers begin to back off and reserve their energy for their event. Tapering is an art and is as individual as the individual swimmer. His tapering means that he’s only swimming four miles each morning now.

And the donations to http://www.alongswim.com are pouring in.

One more thing. We’ll need someone to babysit this adorable rescue puppy who is now full of life and whose feet never touch the ground. Her name right now is Eleanor, but the second he makes it across the English Channel she will become Dover. 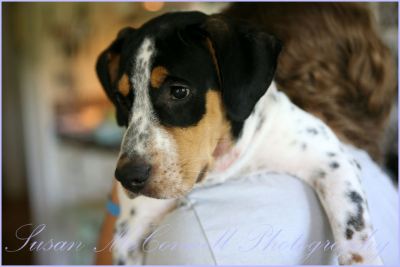