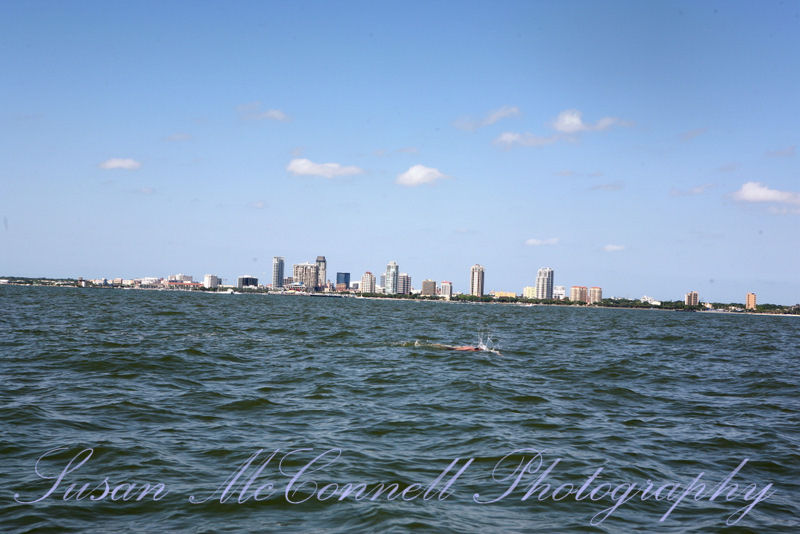 What do you get when you cross your family as your crew, the best boat pilot in Tampa and a very organized and well run 24 mile marathon swim?

You get to come in 7th out of 20 solo swimmers.

Some of our kids were able to make it and along for the task came the one who is more like family than family … Meg. Meg has been our babysitter since Mack was a baby. She’s way more than that now.

Our pilot’s name was Brent and he’d been messing around in boats in Tampa since he was little. He knew the bay like the back of his hand but the James Bondish equipment he used didn’t hurt either. He kept Doug out of shallow water that promises oysters that will cut your feet. He’s a big ingredient in the formula mentioned above that allowed us to finish.

We counted his strokes every ten minutes on the dot, arranged his 500 calories of goo every thirty minutes and we provided some interesting medicine for a nasty jellyfish sting. Meg organized and I took pictures.

Gordy provided the music most of which I don’t care for alone but when mixed and played by him it seemed to have a touch of magic.

In the end, My Bionic Boyfriend was tired and a little beaten up but brimming with confidence about what’s around the bay at that place called the English Channel.

Note: All of the photographs may be seen on the Facebook pages for:

Another Note: Check out Doug’s blog for his perspective. http://www.alongswim.com

PS – In case anyone is thinking about stealing Brent next year … he’s ours. Meg too.